More about the sense of smell 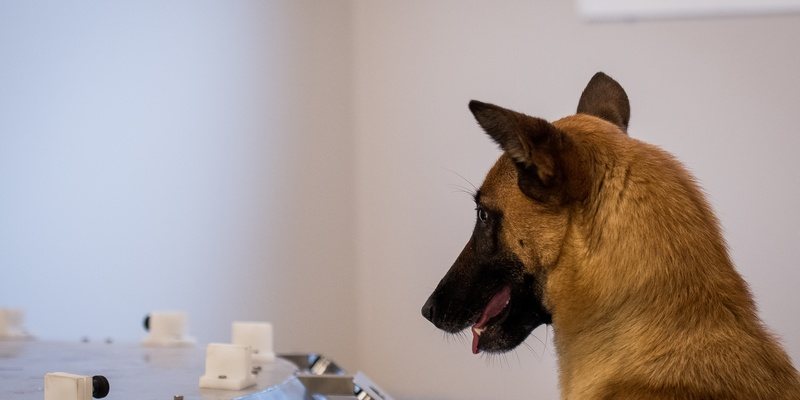 The sensory world of a dog is different from ours – they hear much more, but they see less colours, they probably taste less than we do but they certainly smell a lot more. It is important to bear that in mind when training dogs. You want them to respond to a specific cue, for example a verbal command. But since they register such different things from us, it is hard to be sure they are actually paying attention to just our command! They may be focusing on a small, involuntary movement we give when we give the command. Which only comes to light when circumstances make it impossible to give this involuntary cue, or if someone else gives the command. What helps is knowing as much as you can about the dog’s sensory world. Especially when training a dog on scent: we have so little idea of what their world is like. Today, I will discuss two aspects of the dogs nose that will help understand how their sense of smell works.

Dogs have two scent organs
In an earlier article in Canis (last issue in 2014), I described how a dog smells. A dog’s nose is high tech. It is built to effectively sample the air since the air leaves their nose backwards, so they don’t blow away the scent from the source. Sniffing brings the scent molecules deep into the nose where the smell receptors are located. Dogs have a larger variety in receptors and that is an important part of why dogs are so much better than we are in recognizing and discriminating odours.
On top of this, dogs have a second scent organ that we don’t have: the vomeronasal organ. This is a small organ located in the palate of the mouth, with an entry just behind the front teeth. In general it works like the main scent organ, but there are a few important differences. First, the information that gets there is dissolved in a watery liquid: saliva. Think of the chattering sound a male dog makes when sniffing a bitch in heat. When he’s doing this, he is gathering her information into his saliva so it can go to precisely this scent organ. The expression on a dog’s face when he is savouring this smell is usually quite amusing! Secondly, the vomeronasal organ has different receptors from the main scent system. The receptors in this organ respond mainly to biological information – to the “pheromones”. And thirdly, the information from the receptors is routed differently to the brain. It has significant effects on the moods and drives of the dogs.
So besides being able to analyse scent molecules in the air, dogs are also capable of detecting other molecules through their vomeronasal organ. They learn to do this during puberty when they become interested in mating and reproduction. This is logical since their changing hormones at this time allow them to develop the sexual reproduction part of their behaviour. Castration before puberty limits the development of this system, and male dogs also then do not develop this typical “chattering” behaviour when meeting a bitch in heat – they are not interested in collecting information on her! But when dogs do develop this behaviour, it can be quite persistent and they may continue to do this after a later castration. It can also explain why some dogs what to “taste” things when in training. It simply provides more information.

Effect of sniffing fast
Sniffing is not only an effective way of getting the scent molecules into the right part of the nose, but it also helps the perception of odours. When sniffing at a high frequency, the olfactory system gets “tuned” to the scent molecules in the background. Anything new then really sticks out and can be noticed. Sniffing at a low frequency does not do this.
What does this mean? Imagine a dog following a track, nose deep down, really close on the track. Sniffing at a high frequency makes his nose adapt to the background odour – so if he is on the track, he becomes attuned to the full scent picture of the footsteps, the crushed vegetation, the ground disturbance and the human scent. When he loses the track, he basically encounters a new scent picture: the ground surface without the footsteps, the broken vegetation, the ground disturbance, the human scent. He immediately notices the difference. And turns back to where the track is. It also means that it is impossible for the dog to stay completely on track 100% of the time – he can only notice he is “right” by navigating the edges of the scent cloud over the track.
Sniffing really fast also explains how dogs can detect landmines, or buried human remains, long after the ground disturbance has completely disappeared. Molecules of explosives that leak from the mine, and decomposition components from a human body, migrate with rain down into the soil, and then later upward with evaporation. In this way they move from the source (the landmine, or the body) to the surface. At the surface, there are only minute amounts of these molecules. These small amounts can be measured at the surface using cumbersome high tech equipment, but they are impossible to locate fast using such technology. Dogs are ideal: a high sniffing frequency attunes them to the background odour, and when they hit the ground over a mine or a dead body, their noses immediately notice the difference. Properly trained, they will then alert their handler.

Different information
So dogs not only have a nose that is a super-efficient sampling system, and much more variety in types of receptors that can respond to the molecules coming into the nose! They also have a second sense of smell to help them find a mate and reproduce. And they have a sniffing technique that allows them to respond to small differences in the environment
When you watch your dog gather information, marvel at what he or she is actually doing and able to perceive. And there are more differences that are important to know about, so this story continues. But being able to perceive something in one thing. Training your dog to let you know that he, or she, has actually found something is something quite different. Then you have to know about learning, and teaching. Two processes that result in a well-trained dog only if they are in harmony! 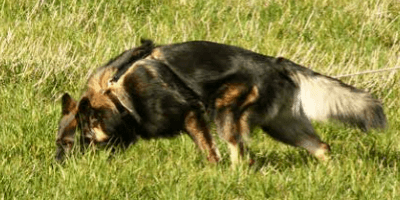