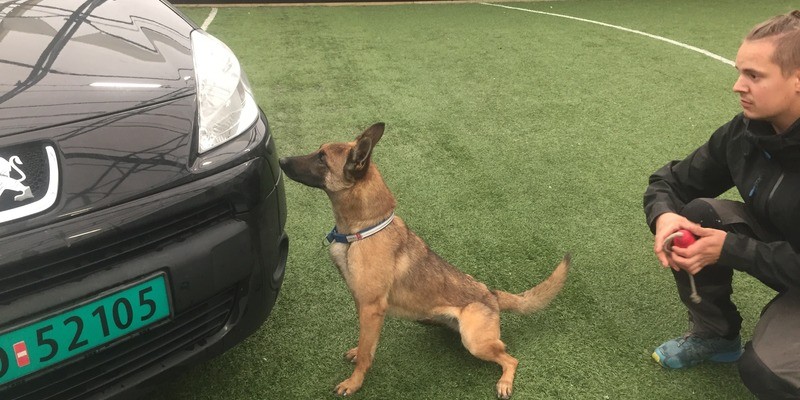 In detection tasks, the dog memorizes a specific target odour, or a group of target odours, learns to search for it in a variety of environments, locate it and demonstrate this by showing a clear, prolonged change in behaviour, preferably focused at the precise source of the odour. In the last issue of Canis, this topic was discussed in some detail: types of learning that are involved, training steps and some elements that require specific attention. Of course, the dog needs to discriminate target odours from other odours that are also in the air, but usually those odours are very different. In what I consider to be a real discrimination task, the other odours are very similar, and the dog is required to make a much finer discrimination.
As in detection, the target odours are known to the dog, and they remain the same. But now the search task is more difficult, because there are similar odours around that are not the “right” ones, and have to be ignored. Discrimination can be part of a full search task in the more classical “detection dog” sense, or it can be a completely separate task.

Fine discrimination as part of a classic search task
Depending on the other odours in the search environment, the detection task of a dog may become pretty difficult. A fire caused by an accelerant for example results in residual odours from the accelerant - hydrocarbons – and odours from the burned material – in the case of burned carpet, also hydrocarbons! It is difficult to tell the difference between these groups using chemical analysis at low concentrations. Arson dogs can be trained to tell the difference – but it does require specific discrimination training. Without such training, the chances are that the dog will respond to hydrocarbons from the burned carpet in the same way as it responds to hydrocarbons of residual accelerants.
Another example of such difficulties is in cadaver dog work. Depending on the environment the dog will be working in, there may be cadavers from non-humans around. Although the odours of dead animals (including people) differ, there are also similarities. And since it is difficult to obtain the right kind of training material, many organisations use pigs to train on. Such dogs may then also locate wild boar cadavers when searching in the woods, but that may still be useful for investigation purposes. However, such dogs will not be useful in locating residual human cadaver odour in for example the boot of a car. A shopping bag spilling over, allowing the bag of meat just bought at the butcher to come in contact with the carpeting, can result in odour cues such dogs may respond to. For such tasks, the dogs have to be trained to discriminate between different cadaver odours, and only respond to the odour of dead people. And they can, if properly trained.

Fine discrimination during tracking
An area where dogs consistently need their discrimination powers is in following a track. To be track sure, the dog needs to stay on the track of one person, the tracklayer, or the animal it is supposed to track. The track may be crossed by others – more recent or older tracks, tracks of other people or animals. When on track, the dog should stick to the one it was started on, and ignore others.
Being track sure does not say anything about which particular odorants the dog is using! A track is a combination of some kind of crushed vegetation, ground disturbance, and odour cues left by the tracklayer – human or animal. Actually, different dogs may be using different parts of this cocktail, even though they are performing the same task. Careful observation of the behaviour during tracking
shows that the dogs “settle” into a track. First sniffing fast and moving slow, they move at a faster pace and with a slower sniffing intensity when they have chosen a direction. A change of surface, or any other decision point where the track has been disturbed or where they have shot over a corner, slows the dog down. It increases its sniffing frequency while it searches to re-locate the odours. The increased sniffing frequency allows the dog to adapt to the odours in the background environment, so the differences stick out (see Canis 2015 issue 3 for more on this topic). When the dog relocates the track, and has adapted to the change in cocktail, it moves off again at its usual pace.

Discrimination as a separate exercise
Discrimination as a separate exercise is part of some sports programs. In these cases, the dog is trained to select his handlers odour amidst the odours of other people: the dog knows the target odour – his handler – and should discriminate it from the odours of other people on the same kind of objects. Usually the dog has to retrieve a wooden stick or dumbbell handled by his handler, selecting it from other sticks or dumbbells handled by other people.
The discrimination ability of dogs can also be used in a more structured setup where dogs are given samples taken from people, or from locations, to analyse. Here we are usually asking them to detect a particular target: a disease such as cancer in a breath, urine or stool sample, a product such as tobacco in an air sample from a container, detecting explosives in samples taken from shrink wrapped pallets of air cargo, the presence of rust in air samples collected from insulated pipes at an oil plant. But the exercise is more difficult since there is no plume of odorants the dog can follow, it is a “yes / no” task, discriminating “positive” samples from “negative” ones. The samples are similar in the way they have been collected and how they are presented, but they differ in the presence or absence of the target odorants the dogs have been trained on.

Progress in training
Training dogs to use their noses is becoming more and more popular. And it is great fun to do this. But we cannot talk to dogs and explain to them what we want them to do, we can only train them by making the exercise as simple as we can to start with, and then very gradually making the exercise more difficult. You need to build it up, step by step. And you have to keep the end goal in sight. If you train your dogs for a very long time on detecting stuff in a clean environment, you may bump into problems if you switch to a discrimination exercise. Consider this from the point of view of the dog. First, from his point of view anything you’ve hidden is OK to respond to, and he’s been doing that for a long period of time. Now, he’s supposed to only detect one particular scent, and ignore all other things you’ve hidden? Why did the rules change, all of a sudden?
Next issue, we’ll talk about another level of training – matching to sample.