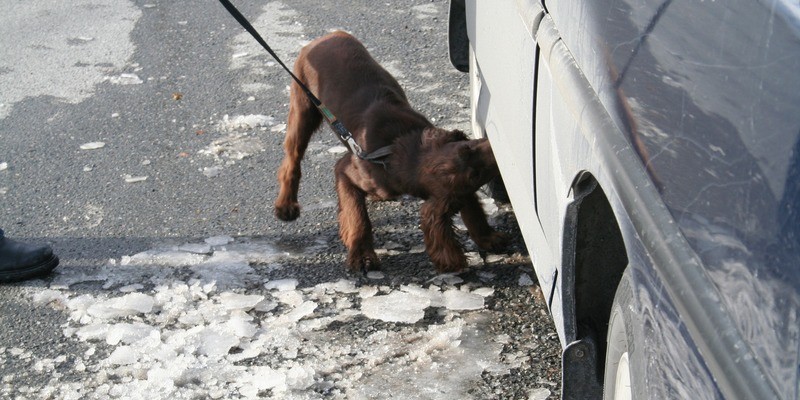 Training your own dog in” nosework” is becoming more and more popular. Many dog training schools now offer courses – it is fun, it does not have to be physically very challenging for the dog or the owner, and there is endless variety in what you can do with limited material in all kinds of environments. We all know how good the nose of the dog is, and we can see their obvious enjoyment when sniffing at everything when we take them out for a walk, so it seems a perfect match.

There is a hole in the general knowledge on how to best train dogs for nosework though. And this leads to very different training strategies. But in general, when training dogs to use their nose to help us find something, the only sensible method is using a reward based strategy. Simply because we cannot force a dog to sniff, and we want the dog to move towards the odour source – which they may not do if they have negative associations with that odour. The smell tasks we give them differ greatly in level of difficulty, and we need to consider carefully what we are doing so we increase the level gradually so we maximise the chance of success.
Scent tasks we put to the dogs can be divided into three categories: detection, discrimination and match to sample tasks. In detection tasks, the dogs detect one or more target odours. In discrimination tasks, the search task is more difficult, or structured, and the dog responds to the target odour while ignoring somewhat similar odours. In match to sample, the dog responds to new odours every time, memorizing a sample odour and searching for a matching odour in a line-up. Today, we will focus on the detection, in following issues we will take a closer look at discrimination and match to sample.

Training detection – first steps
The principle of detection is that the dog can smell, recognize, and respond as trained to a target odour. This is useful when there are no other means for doing this as quickly ourselves, using our eyes or some kind of efficient instrument. Which basically boils down to detecting low concentrations and small or hidden targets – finding drugs in bags people carry with them, locating bedbugs in hotel beds, checking a venue for hidden explosives before an important event, locating tiny drops of blood after a murder for further forensic investigation .
To train this, people usually initially combine a high concentration of the target odour with something positive so the dog learns to associate this positive thing to the target odour. This is Pavlovian or classical conditioning. This is a strong form of conditioning, and done in this way the odour is linked to a positive experience. The “positive thing” can be either food, or play! Whatever is used has to be valuable for the dog to speed up the association. The other reason for using something valuable for the dog is that it creates the right kind of mood. Ultimately, we want the dog to respond in a positive manner, and to move towards the target odour, which will not happen if there is a negative association.
When this first part of the conditioning is complete, the action comes into play. The dog has to learn to find the target, and since he has now associated the target with the positive thing, he will actively go looking for it. This is the beginning of operant conditioning: the dog has to change his behaviour, and he does that because he values the consequences of finding the target.

Using the nose
The next step is to concentrate more on getting the dog to use his nose to find the target. So, concentrations are lowered, and the target becomes smaller and/or is gradually hidden more and more from sight. By systematic training, all the visual cues that the dog can use should gradually disappear. Here you have to remember that it is not only visual cues from the target itself that are important, but also visual cues you may be giving! For example, moving towards the dog when he is getting close to the target, or getting your reward ready when you see he is close. A dog can easily learn to pay attention to these cues: dogs are very sensitive to our body language.
Searching for the target can be done in many different ways: running around and hoping to hit the plume, intense sniffing while moving very slowly, moving with their handlers and paying special attention to the spots they indicate, learning fixed search patterns to maximize the chance of hitting the target, searching a distinct object such as a car. On leash, off leash. Close to the handler or at some distance. The future deployment determines the best search method, and the trainer should bear this final goal in mind when setting up the training.
Then, the dog has to learn to perform some sort of indication – barking, sitting down, or freezing, preferably focused on the hidden target. This is also called operant conditioning:  the dog changes his behaviour for a favourable consequence: a reward. This is an essential element in the detection process. The only way we can see that the dog has found something is when he changes his behaviour. They need to behave in such a way that we cannot possibly mistake it: not a quick “point here it is” and then moving on, but an enduring focused response that even someone who does not know the dog can recognize.

Generalization – doing it everywhere
When the dog knows what he is looking for, knows how to search and indicate, the generalization process can begin. Gradually, the amount of distractions during the search are increased: initially searching in quiet environments without strong background odours, indoors in a familiar room for example, to more busy smelly environments like a garage or storage hall. And finally the dog is taught to search and expect to find targets in all the different work environments he will be exposed to.
This principle is followed for many police, customs, and military detection dogs trained on drugs, explosives, money, and tobacco amongst others, but also by civilian detection dogs trained on bedbugs, moulds, and ore. Some hunting dog tasks are also detection tasks: the game has been shot out of the air and has to be found and retrieved. The target odours are linked to specific products and remain relatively stable. And dogs can be trained to detect several targets, building up a “library” of product scents they link to a reward. For example, a drug dog learns to find many different kinds of drugs, and explosives dogs find different kinds or explosives.
Detection of human odour is slightly different since human odour (and the odour of human remains) is less stable. Dead or alive, a whole person or a scent trace, time and environmental circumstances all have a significant impact on the scent picture. So here the “library” does not consist of many different products, but of variations of what we see as being the same product – human scent. Sports programs often have human scent detection task elements: retrieving human scented objects and locating a hidden person can be found in many of them.

The three elements in the detection process are recognizing the target odour, learning to search, and performing a focused indication. These three elements are linked, they can be chained together in different ways, and in training each of them deserve special attention.
In the next article, I will focus on scent discrimination and why it is important, and later on match to sample and why this is difficult. But you may have questions that you would like to ask. Please let me know! Write your questions to, and I will try to answer them in another issue.